Somewhere along the readingrainbow, I came across an argument/question that went something like this: is it cultural imperialism to suggest that because we pick up and gather our garbage to move it and pile it and bury it in specific toxic locations? Is it better than what happens in less bureaucratic places, where garbage/litter/rubbish basically goes wherever anyone leaves it? Meaning, the appearance is one of less organized (space) and perhaps even more polluted (places), even though the levels of toxicity is likely less-concentrated and thus less-harmful than the former method of strict cultural garbage policing practices.*

* (Note) Memory isn’t all it is cracked up to be: Thanks Jim Morrow for pointing me back to the source which is: The Journey Home: Some Words in The Defence of the American West, a collection of writings by Edward Abbey. Perhaps of some interest is the fact that this essay, The Second Rape of the West was originally published in Playboy, vol. 22, no. 12, December 1975 (Playmate: Nancie Li Brandi ** Linked here because a search for the essay in the Playboy issue yielded the linked result. The issue of the Playmate (is that still a thing? Holy Shit, it is still a thing. Anyways, the Abbey quote goes like this: ‘Rumbling along in my 1962 Dodge D-100, the last good truck Dodge ever made, I tossed my empty out the window and popped the top from another can of Schlitz. Littering the public highway? Of course I litter the public highway. Every chance I get. After all, it’s not the beer cans that are ugly; it’s the highway that is ugly. Beer cans are beautiful, and someday when recycling becomes a serious enterprise, the government can put one million kids to work each summer picking up the cans I and others have thoughtfully stored along the roadways’. The rest of the essay is, as the title suggests, bleak.

Broken Windows can be summarized by this phrase “untended property becomes fair game for people out for fun or plunder and even for people who ordinarily would not dream of doing such things and who probably consider themselves law-abiding… But vandalism can occur anywhere once communal barriers—the sense of mutual regard and the obligations of civility—are lowered by actions that seem to signal that “no one cares.”

As the New Yorker identifies – The Other Side of Broken Windows, is one where a place based approach becomes the focus rather than a peopel based approach: “What the Philadelphia studies suggest is that place-based interventions are far more likely to succeed than people-based ones. “Tens of millions of vacant and abandoned properties exist in the United States,” Branas and his team wrote. Remediating those properties is simple, cheap, and easily reproducible. What’s more, the programs impose few demands on local residents, and they appear to pay for themselves. “Simple treatments of abandoned buildings and vacant lots returned conservative estimates of between $5.00 and $26.00 in net benefits to taxpayers and between $79.00 and $333.00 to society at large, for every dollar invested,” the team wrote. It’s not only more dangerous to leave the properties untended—it’s more expensive.”

I grew up in the suburbs. The kind of place where broken windows philosophies prevailed. People it seems were kept largely in-line becaue of what I percieve as a dominant veneer of order. The suburbs, in this case Stathcona County, which includes oil refineries and rural areas in 2018 ranked #31 on a MoneySense list of 100 wealthiest places in Canada at an average household networth of $1,171,105CAD. For context, West Vancouver comes in at #1 with an average household net worth of $4,536,269CAD. As self-reported by Strathcona County, the average houshold income is $160,655/yr/CAD.

So, even though my own dollar amounts in terms of wealth and income do not come anywhere close to the amounts I just mentioned above – the effect of growing up within the context of great economic wealth has had an effect on my psyche, A) daily I contend with the anxiety that I have not achieved the economic foundation that my parents generation did, and B) that wherever I go, city, town, place, I end up holding up a metaphorical Grey Card that was calibrated to interpret that Stathcona County is the norm, against which all else of compared. The problem with this kind of patterned thinking is that it works in direct contrast with my training as a Sociologist. Sociology trains students to see the grey between binary poles of black and white, but, in my case, what I am expressing is that my grey is likely skewed. Perhaps what is clear is that I am curious enough to engage with the literature and then act.

Okay, now that I have exumed the psychoanalyisis of self, I will now move on to the way in which my personal psychogeography acts in relation to place based chaos, like litter…

Today July 5, 2019, I found myself acting in fairly automatic ways to

A) remove some graffiti on a stop sign outside our house. And
B) while at a community neighbourhood park (not our closest or most frequently visited one) Little A was playing games with some other kids, so I took the opportunity to pick up a whole grocery bag full of garbage, as well, I called the city hotline (in Edmonton, thats 311) to let them know that the Garbage bins needed emptying.

While I picked up garbage I noticed that others prefered not to notice me – as though there is some particular social rules that a half dozen other adults, and a few dozen children, who watched me seemed to follow while they did their best to pretend I did not exist. My action became a form of invisibility. The garbage strewn about the park, the wrappers and lids and balloons, all vanished from the green and sand space, and simultaneously I disappeared while picking up. Even the four playground City of Edmonton staff members choose to avert their gaze when I looked up.

What is my hope here?
That spaces populated by children remain garbage free? Of course my action has no bearing on pollution at the large scale. So, I guess I am just a broken windows kid from the priveleged pristine suburbs trying to live in a city where detritus, garbage, and other sundry items populate and clutter, built and manufactured spaces. Or perhaps I believe in the idea that when we tend and nurture spaces, our lives are positively shaped by the affective qualities of taking care, maintenance, and earned pride. 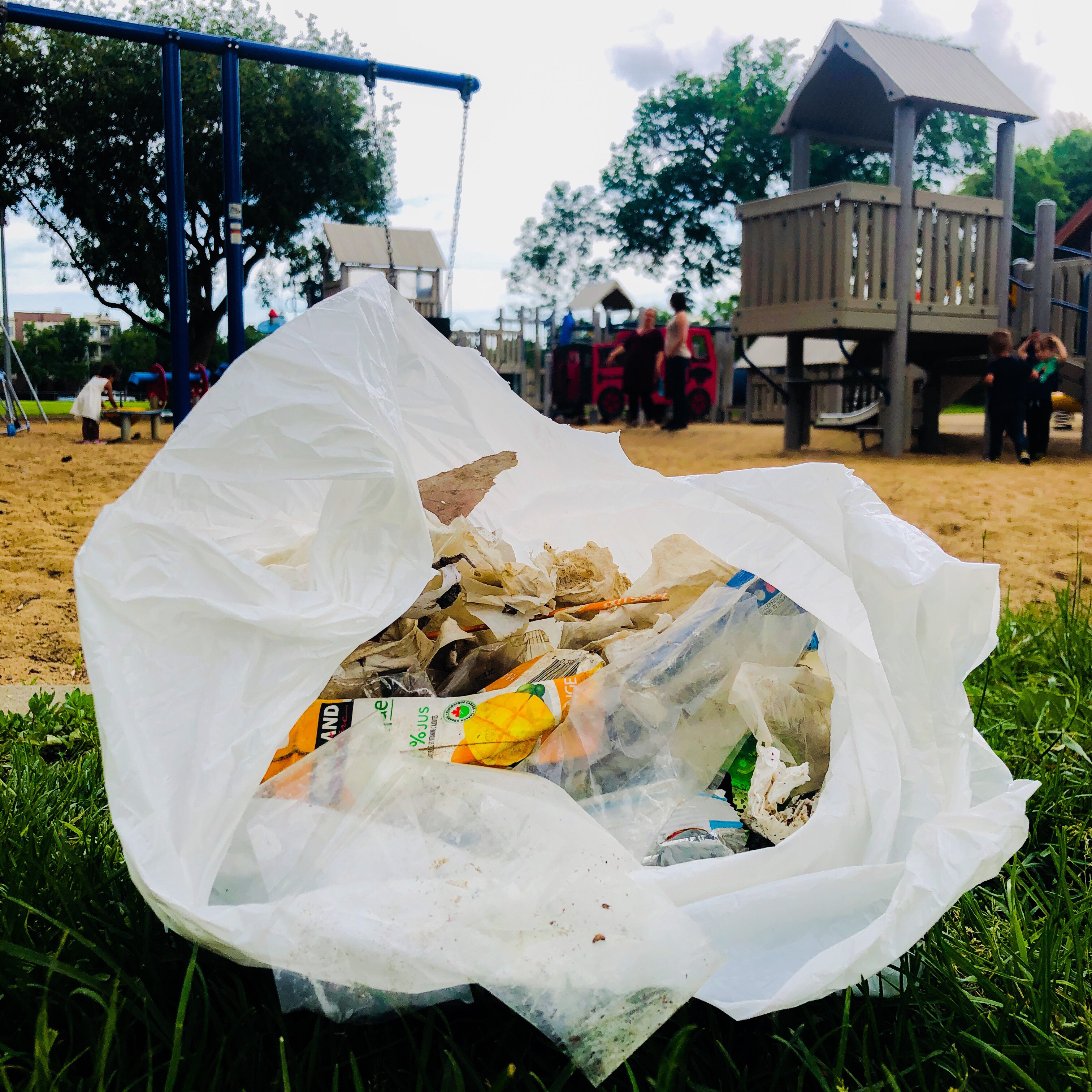 Apologies, this post grew into something larger than my 500 word intent.

Yes, I am aware of: Praxis Makes Perfect, the second studio album by the pop–electronica–hip hop duo Neon Neon, which was produced by Boom Bip and Gruff Rhys, and the album was released on 29 April 2013 by Lex Records. I like the phrase, though it presents a logical problem I’ll return to later. For now…

This brief entry marks the first in an ongoing series where I tarry with the fact that I have a Ph.D. in Sociology and the fact that I have yet to land something like a tenure track job. The effort here is one where I hope this process of one image and less than 500 words of text, will help me to decouple the notion that I am of less value because I do not have x job. And, instead reaffirm that, most people do not do exactly what they were trained to do. So, the question I aim to answer here is, what else can I do, make, think, in relation to the training I am fortunate to have experienced beyond the narrow self-identification of Professor of Sociology. The thing I wrestle with is the ongoing mental chatter that repeats “I am less than because I have not attained to x.”

Problem: My partners farther has mobility challenges related to the fact that he has a rare degenerative condition known as IBM. Basically, his muscles are deteriorating. In a few days he will be coming to visit us. So, what can we do around here to make it easier? For starters, we can raise the height of a reading chair so he can have somewhere that is high enough for him to feel confident to stand up out of. The issue isn’t the sitting, its the standing. The standing is something he wants to maintain control and autonomy over.

Analysis: Is the DIY project a global remedy? No. But it solves a specific problem in our dwelling. Part of the reasoning here was to adjust both reading chairs to create visual and functional unity, as well as function within the principal that a ramp added where a step once was will increase the use value for a greater number of people (of course there is the issue of balance and how some folks do better with flat stairs than inclined ramps). The point here is that, we now have two chairs that sit 5.5″ higher off the ground, and for the majority of those who sit in these chairs, the difference will be hard to notice, and for those who need some structural assistance, the help is available for all bodies.

A reader shared this link with me – and now I share with you: 3D Printer Mods for IKEA stuff. https://www.lovethatmax.com/2019/03/ikea-creates-stuff-for-disabled-people.html